Observers of the Syrian rebels are often asked about the ideologies of the groups they track. Most of these groups, however, do not explicitly outline their ideologies, and many may not have systematically thought out where they would stand on many issues.  Analysts are therefore left to collect bits of evidence in an effort to place groups on a spectrum from secular to global jihadist.  An example of the evidence used to make these determinations is attitudes toward female fighters.

In early July a Canadian-Syrian woman named Thuwaiba Kanafani declared that her group of fighters in Aleppo were members of the Suqour al-Sham Brigade.  Ahmed Abu Issa, the leader of Suqour al-Sham, quickly released a statement denying that his group had any female fighters, thereby confirming Suqour al-Sham’s Islamist leaning.

The Daraa al-Thawra Brigade, based in northern Idlib and led by Muhammed Bakour, has a different attitude toward female fighters.  On August 3, the Daraa al-Thawra Facebook page posted a picture of a young woman in military fatigues with her hair uncovered, holding an AK-47 with the caption “God protect her.” It therefore appears that Daraa al-Thawra, the group responsible for capturing the Bab-Hawa border crossing in May and again in July, is one of the more secular leaning groups in northern Syria. 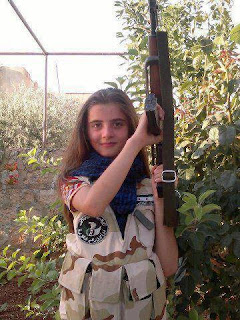 A member of Daraa al-Thawra