One day in mid-October Jamal Maaruf and the men of Shuhada Suriya heard the sound of explosions to the south. They inquired with contacts and learned that fighters aligned with Afif Suleiman’s Idlib Military Council were attacking regime positions in Maarat al-Numan, a small city just west of the M5 Highway and south of the rebel-held hills of Jebel al-Zawiyah. Maaruf and his men gathered their weapons and joined the fight. Within 24 hours, the rebels pushed the regime out of Maarat al-Numan, extending the rebel held section of the M5 highway further south. The fighting then shifted to the Wadi Deif military base just east of the highway while the rebels simultaneously fought off armored convoys approaching from military bases in Hama and endured constant air attacks. Maaruf’s brother Muhamed, a mid-level Shuhada Suriya field commander, died in the fighting.

As the battle raged on, Suleiman arranged a meeting of the rebel groups involved. Maaruf claimed that Suleiman offered to come visit Maaruf to discuss the plan but Maaruf insisted that he come to Suleiman as a sign of respect, recognizing that Suleiman outranked him in the loose rebel command structure. Maaruf claims that he tried to work with Suleiman, providing fighters and even two tanks. After the rebels failed to capture the base and Maaruf’s ammunition ran low, he pulled some of his fighters back to their villages, an action that angered rebels still fighting in Maarat al-Numan (The Shuhada Maarat al-Numan Battalion, part of Shuhada Suriya, stayed behind).

The criticism became a source of concern for Maaruf, who responded with a long statement on Shuhada Suriya’s Facebook page claiming that he did all he could, working with Suleiman until his supplies ran low. At the end of the statement, however, came a direct challenge. Maaruf claimed that if those supporting Suleiman would send Shuhada Suriya “half the weapons” sent to Suleiman, he would take Wadi Deif, implying that Suleiman had mismanaged the siege.

Shuhada Suriya is one of Syria’s most powerful rebel groups, recently posting a video of the largest known gathering of Syrian rebels to date. Despite Maaruf’s celebrity, however, he is unable to attract the level of financial and material support that Suleiman, the provincial council leader, receives. This is not a bad thing. Provincial councils can only assert control of rebel groups if they control money and weapons. But when council operations are not successful, rebel leaders will question the councils' control, a drawback of the rebels' loose command structure.

Posted by Asher Berman at 12:24 PM No comments:

The Capture of Air Defense Stations

Idlib’s ‘other’ military council, led by Mustafa Abdulkarim had its first success in early November when it captured the Duwailah air defense station outside Salqin after a month long siege, no doubt assisted by the unique terrain surrounding the regime’s position. As Riad Kahwali pointed out, this operation was part of a larger trend of rebels capturing air defense stations across Syria including in Damascus, Aleppo, Homs, and Deir Ezzor, part of what Kahwali described as, “laying the ground for a no-fly zone.”

However, capturing air defense stations will not directly lead to the overthrow of the Assad regime as they are defensive assets, not a part of the regime’s repressive machine. The capture of these positions are also not likely to make an intervention more appealing for the West, as the effectiveness of Syria’s air defense system was already called into question in 2011. Fear of the regime’s military capabilities is not what is preventing an intervention. The capture of these positions is, however, providing the rebels with access to  advanced weapons , as well as large amounts of ammunition. It is also a sign that the rebels’ military capabilities are continuing to improve. As of late spring 2012, rebels considered the capture of a checkpoint a major success. The rebels then moved on to capturing regime-held towns and border crossings, and since mid-summer 2012, began taking air defense stations which usually amount to small military bases. There are now signs that the rebels are seizing larger military bases, such as the section of the special forces base south of Atareb, captured today after part of the garrison defected.

Posted by Asher Berman at 6:07 PM No comments:


Basil Issa, one of northern Idlib’s primary rebel leaders was killed in an airstrike yesterday. Issa's Shuhada Idlib Brigade, captured the town of the Harem near Syria’s northwestern border with Syria this past week. As with other towns, the regime’s response to the rebel seizure of Harem was to continually bomb it from the air. In addition to a mosque and apartment buildings, the regime got lucky when it killed a man at the center of the rebels’ success in northwestern Idlib.

After rebel bands fled Idlib city in March 2012, Issa played a leading role in organizing them into hierarchical command structures. This allowed him to execute one of the rebels' first large-scale operations when he led over 400 fighters on an assault on the town of Armanaz in June.

In July, Issa and his men captured the town of Salqin from a contingent of Shabiha. In early September, Issa led his first assault on Harem but was forced to withdraw after a several days of fighting. He returned to Harem in late-October, this time successfully forcing the regime from what may have been its northernmost position. This was Issa's final battlefield success.

While it is unclear who will take control of the Shuhada Idlib Brigade, there are several candidates. First is Muhanad Issa, a relative of Basil. In July, Muhanad described himself as the vice-commander of the Brigade, but he does not play a role in combat operations. Instead, he playes the role of an activist, granting interviews in Turkey and serving as the head of the Idlib City Revolutionary Council’s Military Bureau. Other candidates are the leaders of the Shuhada Idlib Brigade’s most active battalions: the Jaffar al-Tayyar Battalion and the Uthman bin Affan Battalion.

A video of Basil celebrating the creation of his brigade. 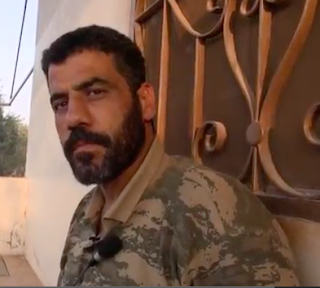 When provincial military councils began forming in the early 2012, the idea was for every province to have one council, creating a unified rebel leadership in each province capable of coordinating rebel activity. Unfortunately, the council leaders, usually defected colonels, were not able to unite all the provincial rebel groups under their leadership, partly because rebel groups were not dependent on the council for financial or military resources. Today, not only are the councils unable to claim membership of all the major rebel groups in their provinces, but competing senior rebel leaders are forming alternative military councils, leaving provinces with multiple councils.

In Idlib Province, the main council was formed in April under the leadership of Afif Suleiman, an air force colonel that defected in January from his base in Hama. Some major Idlib groups, such as Shuhada Suriya, have operated under Suleiman’s leadership, but in the past two months, two new Idlib Military councils have formed. The first, formed in mid-September under the leadership of Muhanad Yahya Bitar. On October 24, Mustafa Abdulkarim, leader of the Deraa al-Thawra Brigade in Sarmada, formed a new military council comprised of 25 rebel groups located across the province. Abdulkarim’s council appears to be a consolidation of Bitar’s council as Bitar was included in the list of council members. Most of the rebel groups in Abdulkarim’s council are smaller, recently formed rebel groups, with the exception of Bilal Khabir’s Sarmin based Ahrar al-Shamal Idlib, formed in February 2012. 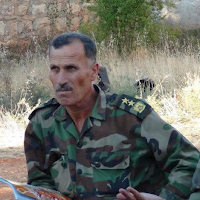 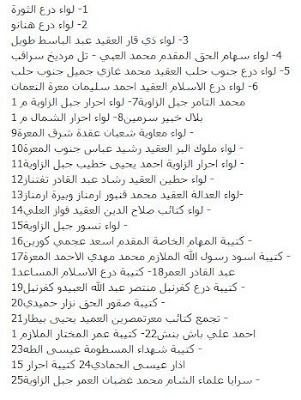 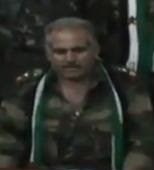