A recent article by Rania Abouzeid brought important parts of the rebel supply network into the light. The following blog post aims to build on Rania’s impressive reporting by outlining the Kuwaiti supply network referenced in her report.

Rebel groups across Syria receive funds and weapons from the Haia al-Shaabiya l-Daam al-Shaab al-Suri (which loosely translates to The Popular Commission to Support the Syrian People). The organization is run by two young Kuwaiti sheikhs, Sheikh Hajaj al-Ajmi, and Sheikh Irshid al-Hajri.

The sheikhs do not appear to receive direct support from the Kuwaiti government as Sheikh al-Ajmi has said that he does most of his fundraising through Twitter where he has over 110,000 followers. The Haia has also released a video in which prominent Kuwaiti artists, sheikhs, and athletes make emotional appeals for contributions.

According to al-Ajmi, he began sending arms to the Ahrar al-Sham Battalions as well as Free Syrian Army units via Turkey in 2011 (this early activity is unconfirmed). During the summer of 2012, the Haia’s activities became more public, possibly coinciding with an increase in the amount of assistance being sent to Syria.

On June 30, the Umma Brigade, led by Libyan revolutionary Mahdi al-Harati posted a thank you to the Haia and the people of Kuwait for their “material support.” On August 1, Ibrahim Ayoub, leader of the Hamza Battalion and member of the Rastan Military Council released a Youtube video thanking the Haia for its support in the form of $10,000. The Thuwar al-Shaidat Battalion, based in Deir Ezzor released a video on August 20 thanking the Haia for its backing, and another Deir Ezzor group was so grateful for the Haia’s sponsorship that they named themselves in honor of Sheikh Hajaj al-Ajmi.

Funders of the Syrian rebels are often accused of distributing funds based on ideological preference. Interestingly, the Kuwaiti Haia does not appear to be doing this as its beneficiaries lie across the ideological spectrum. Ahrar al-Sham is considered a mostly salafist group, while the Umma Battalion is a moderate Islamist group, and Ibrahim Ayoub is on the secular end of the spectrum. The amount each of these groups receives is unknown, however, and it is possible that the distribution of funds is weighted toward Ahrar al-Sham. 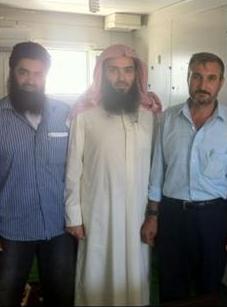 Sheikh Irshid al-Hajri (Left) and Sheikh Hajaj al-Ajmi (center) meet with Riad al-Assad, head of the FSA during a trip to Turkey in late June. 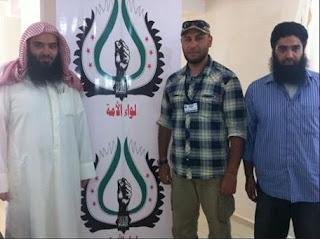 The sheikhs with Mahdi al-Harati, head of the Umma Brigade 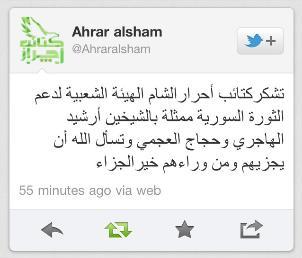 The Ahrar al-Sham Battalions send the sheikhs a thank you tweet
Posted by Asher Berman at 5:27 PM