How Should Idlib's Islamists be Handled?


The Idlib Revolutionary Council held a meeting in Reyhanli, Turkey this week in which a new member was elected to the council and rules of procedure were adopted. Continuing the council’s policy of operating in the public eye, unique for political activists, videos of the proceedings were posted on YouTube. More significant, however were the rebel groups not represented at the meeting: The Idlib Tawhid Brigade, the Yusuf al-Athima Brigade, and battalions from Ahrar al-Sham and Suqour al-Sham.

These are the Idlib's most Islamist groups (with the exception of the Tusuf  al-Athima Brigade whose religious ideology is unclear). A statement was posted on the Idlib Tawhid Brigade Facebook page denouncing the election for “not represent(ing) the actual revolutionary movement.” The statement claimed that the election was held “without the knowledge of these forces and without their representation.” The Yusuf al-Athima Brigade later denied being part of the statement, saying they were taking a wait and see approach to the council.

It seems that the most extreme Islamist groups are being frozen out of Idlib’s internal political process which is aimed at administering the liberated areas. This raises a familiar debate: Is it wise integrate extremists into the political process and hope that doing so moderates them, while running the risk of allowing extremist groups to dominate? Or is it better to marginalize them and prevent extremists from influencing the legitimate political process, while possibly forcing them to use violence to pursue political goals? These are questions that moderate Syrians have to address as the rebels gain decisive control over large swaths of the country. 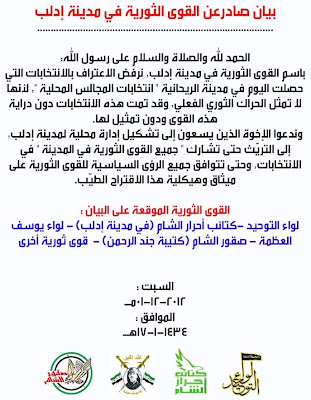